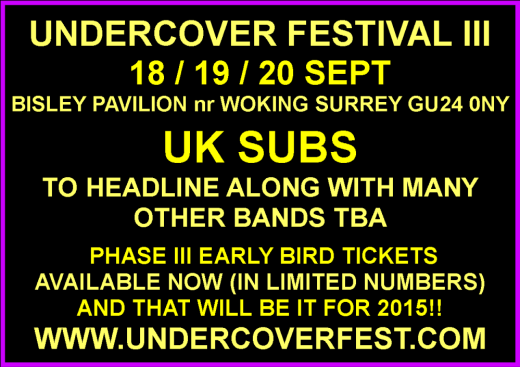 We’ve managed to wangle ourselves onto the Undercover Festival III next year. We will be playing on the Sunday and would love to see some friendly faces in the crowd. It may be a little way off but it’s still very exciting

Check out the Facebook Event Page for the latest details.

Been a bit lax on the whole website update thing, sorry. I’m sure you all get your info off the Face Books these days anyway but still…

You will want to be there 😉

Thanks again to BLACK PoWDR ENGINE for recording us!

As if the new Split just below wasn’t enough, BLACK PoWDR ENGINE has done us another treat with a video for Bowling Shoes using footage from our gigs last month. Awesome job again!

We’ve some new music! What are the chances eh? So, we joined up with our good buddies Black Anchor to bring you a a Split EP, we’ve got two new songs on there along with a cover of their classic Halite. They in return have 3 new songs and a cover of our noise-a-thon Time To Lose from the Passive Regressive EP. As usual this all comes to you for the low low price of nowt, grab it while you can (erm… forever?).

Video from The Drift Bar

Thanks very muchly to Mr Dave Glover we have a video from last nights gig with Trash Arts at The Drift Bar.

And thanks to all that dared come to a late night gig on a Sunday, hope you aren’t suffering too much today!

Big thanks to Geb Babey over at Louder Than War for their review of Passive Regressive, Check it out!

Video from The Xmas Covers Gig

Thanks again to BLACK PoWDR ENGINE, we have another video of us playing live, here is a compilation of us playing at The One Eye’d Dog last Sunday night.

Well, in stores as much as on digital distribution websites but hey, we’ll take that. The world is a weird and wonderful plaice and for all the weird people out there that would rather pay for our EP than download it for free (which you can still do ofcourse ;)) you can now go to your favourite MP3 purchasing store and buy a copy if you feel so inclined to.

We’ll be adding more links to the Passive Regressive page as we see them popup, as of now, its available on Amazon MP3, Google Play Music, iTunes and Nokia Music at completely random prices for some reason.

First off, thanks to everyone that came along to the Edge of the Wedge last night, what a great night of music!

Next up, we are playing a few covers at the annual Southsea Christmas Covers Party at the One Eye’d Dog in Southsea on Sunday the 23rd of December.

It’s baaaaaack!
We’ve returned for the third incarnation of the Southsea Christmas Covers Party, all in aid of the Rowans Hospice, Purbrook.
The premise is simple: 8 bands, each with three cover songs in different styles. No serious stuff, no skills at all, gags galore.

So, what do you get for your ca$h?

Not only that nice glow in your chest for donating money to The Rowans, but…Watashi Calcutecs – Asian hot sauce on maths tool shocker.
Battery Hens – More guitar pedals than Southsea has hipsters.
Capsized – Like the size of a crap, but not.
Contra – Not Dragon Eye Morrison, but just as old.
Protein Window – Fat lads eating chicken.
Red Seals – Aquatic ginger mammals.
Shooting Fish – Captain Birdseye infused punk.
Udy and the Brailettes – Bad taste folk pop with girls (apparently)Get yourself down, ’tis the musical highlight of the year *cough*

So come on down for some festive fishmas cheer!
Fishbook Event